What are my Transport Options?

In much the same way that later CORBA specifications described how different ORB implementations should inter-operate (via IIOP) the OMG now has a specification to enable interoperability amongst DDS implementations. This part of the DDS specification was initially called RTPS or Real Time Publish Subscribe. It is now known as DDS Interoperability Protocol (DDSI). This wire protocol uses the OMG Common Data Representation (CDR) to encode data in a platform-neutral way such that it can be sent over the network. DDS implementations can still support multiple transports.

OpenDDS supports "one to one" (point to point) and "one to many" (multicast) styles of publishing.

The hallmark of many real-time publish/subscribe systems is a transport which is very particular to the problem domain. Different industries already have existing transports, such as factory automation, financial trading systems, defensive systems sensors (sonar, IR, radar), etc. Many of these domains have transports combined with a higher level protocol. These legacy systems must be accommodated.

OpenDDS separates the transport from the higher level protocols by means of an Extensible Transport Framework (ETF). The diagram below shows the ETF aspects of the architecture. 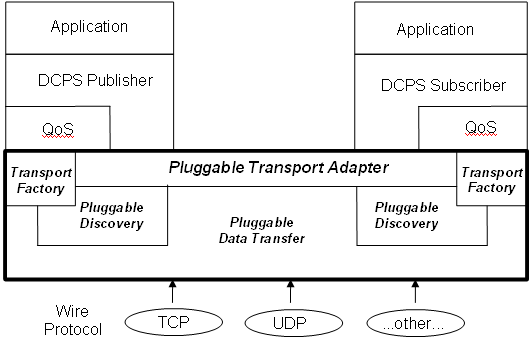